Nectar VS Casper: Which Mattress Is Best? 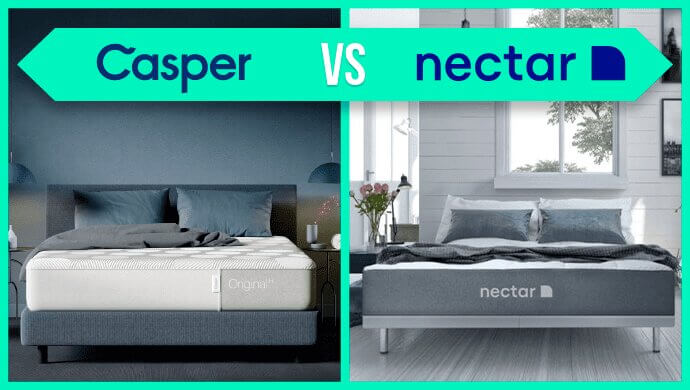 Everyone needs a good night’s sleep, and a top-quality mattress is the best way to get just that. But with so many popular mattress brands out there, which one is right for your needs?

In this article, we’re going to compare two industry-leading mattress brands – Nectar and Casper, to help decide on the right bed. For each brand, we’ll mostly be discussing their Original models, but we’ll also take a look at Casper’s Hybrid models and Nectar’s special Lush mattress.

Both Casper and Nectar’s beds come with some impressive, uniquely defining features. Let’s dive right in then, so you can make a more informed decision about which sleep solution is right for you!

Before we get into the many differences between Casper and Nectar’s Original mattresses, let’s see what the two have in common.

Pressure management – if you struggle with pain in the shoulders, hips, or lower back, these mattresses are made for you. The Casper and Nectar Original beds provide superior pressure relief to sensitive areas.

Nectar vs Casper: Construction and Materials

Well, we’ve now seen what makes the Nectar and Casper Original beds similar. Given that this is a comparison review, you’re probably wondering how the two models differ. Well, let’s get to it!

The original Nectar memory foam mattress is actually an all-foam bed-in-a box with multi-purpose layers. On the topmost layer is the cover quilted along with a touch of memory foam. The top layer has a nice plush feeling to it and provides sleepers with appreciable comfort the moment you lay down.

Next up is the layer of gel-infused memory foam, also known as the comfort layer, which has a very slow response to pressure. When you lie down on the bed, you’ll feel your body relaxing into this layer as it sinks and hugs the shape of your body. The material contours to your body, offering maximum pressure relief to sensitive regions. Memory foam has an unfortunate tendency to trap body heat, making for a hot, uncomfortable sleep in warmer climates. Fortunately, Nectar’s gel-infused memory foam boasts cooling properties, and is sure to prevent you sleeping hot overnight.

The following layer is yet another layer of memory foam. However, this layer has a slightly quicker response to pressure. Its primary function is also body contouring and helps you sink deeper into the comfort of your mattress. This is especially beneficial for side sleepers or even those who suffer from body aches.

The final layer is one of high-density polyfoam that works to keep the mattress stable and in shape.

The cover of the Casper mattress is made from a knit polyester blend, and so it has a soft, stretchy feel to it.

When you look under the cover, you’ll see the top layer made of aerated foam. This material provides a slow response to pressure, allowing the sleeper to sink in slightly. Casper combats the issue of overheating by small aerations along the surface so it keeps the material breathable.

The next layer is a little bit more advanced as compared to the Nectar mattress. The memory foam used here has different firmness in each of the three zones. The foam at the shoulders is a bit softer and a little firmer at the hips. Not only does this create a special balance but also aligns the sleeper’s spine in the way it’s supposed to be.

The base layer of the Casper mattress is also made of high-density polyfoam, same as the Nectar Original, for the same structural reasons.

Nectar vs Casper: Which one is more comfortable?

While a bed’s construction is certainly an important factor to consider, what we prioritized more is how sleepers actually feel while lying on the mattresses.

First of all, the build of the Nectar mattress with its thick memory foam makes it much softer than the Casper mattress. It also offers superior pressure relief, providing sleepers with a plusher, contoured feeling of comfort. Considering side sleepers prefer greater pressure-relief, the Nectar mattress is quite popular amongst them!

In contrast, the Casper mattress offers significantly less sinkage than the Nectar. So if you’re a sleeper that prefers to sleep “on top” of the mattress, then the Casper Original has you covered. Since it uses both latex and memory, and even zones of polyfoam, it has an intentional lift, so the sleeper doesn’t sink in more and more. Moreover, this option is best for those who tend to switch positions a lot during their sleep.

It’s a known fact that foam traps heat. Since both of these mattresses are an all-foam mattress, they will undoubtedly do the same. The cooling features of each item allow this issue to be cut down by a lot. Casper boasts superior temperature regulation thanks to its AirScape ventilation and lack of thick memory foam on the top layer, making it the cooler sleep solution.

On the whole though, the Casper Original mattress is slightly firmer than the average mattress, averaging at around a 7/10. On the other hand, Nectar Original has a score of about 6.5/10, slightly less firm than the Casper.

Even without coils, both Casper and Nectar provide very good edge support. It has enough support to make you feel secure when sitting or even lying down on the edge of each item.

If you’re sharing a bed with your partner, then the Nectar is probably the better choice, given that it’s a lot better at inhibiting motion transfer than the Casper. The memory foam on top has to do a lot with isolating motion from reaching to the other side when someone moves around on the opposite edge. No one likes to be disturbed by their partner, so we’d recommend the Nectar for couples!

Nectar vs Casper: which one is cheaper?

A Nectar vs Casper comparison will be incomplete without discussing the pricing as it is an essential factor in most people’s decisions.

The classic Nectar memory foam mattress is one of the most popular items in the market and starts at about $800 for a twin size and $1,400 for a Cal king. They’re not always this expensive as prices are cut down a considerable amount. For example, the twin size is usually sold at about $500 while the Cal king ranges about a $1000 only.

Moving on to Casper mattress price, the Original ranges from $595 to about $1295. The cheapest Casper mattress opens up at $400 called the Element. And the Nova Hybrid or the Wave Hybrid is more on the expensive side and can reach up to $3000!

The Casper mattress price also depends on the regular discounts they offer on the Original, Nova, and even the Wave models. Despite the discounts, Casper beds are still typically pricier than the Nectar alternatives. Thus, Nectar is typically the more affordable option of the two.

Nectar offers an industry-leading trial period that lasts as much as 365 days! Having an entire year to test your mattress out gives you the opportunity to see how it functions in every season. This is especially important for making sure that your bed doesn’t sleep hot during the warmer months! Nectar offers sleepers an insane Forever Warranty through which you can return or repair your mattress at any point in time! For the first ten years, the service is free, after which you can still get your Nectar mattress replaced or repaired for an additional $50 delivery fee.

As for Casper, the brand offers a standard 100-day return policy. While this is not as extensive as Nectar’s trial period, it’s more than enough to decide whether the bed is right for you or not. Unlike Nectar, Casper isn’t lenient with its replacement policy. Once the ten-year warranty has expired, not many options are available to you.

One good thing both brands share is the fact that they both offer free shipping – always a plus point!

In general, we’d say the Casper mattress is better for those who prefer a little more support, particularly back sleepers and heavier users. Also, if you’re a hot sleeper, then Casper’s AirScape ventilation technology can really help you sleep better.

Nectar, on the other hand, is better suited to light and medium weight sleepers, especially side sleepers that will appreciate pressure relief on their shoulders and hips. In general, Nectar inspires confidence as a long-term investment too. Its Forever Warranty, in particular, means that you’re set for life!

So which mattress are you going to go for? If you’re still on the fence, read more about each bed on our website!

Asya is an experienced and professional consumer product reviewer and writer. She excels at thoroughly researching her subject so that she can convey information in a way that is helpful and easy to understand.

Join the discussion by writing a question or comment in the form below.

Join the discussion by writing a question or comment in the form below.

am interested to know which of those mattresses is the deeper. As an older person I find the more traditional mattresses are very deep and heavy which makes the beds very hard to make. hard to make

The Nectar mattress is 11″ deep, as is the Casper Original mattress. If you want a deeper mattress, you could choose Casper’s Wave Hybrid model, which is 13″ deep. For a mattress not covered in this article, consider the Saatva Classic mattress, which comes at a choice of heights, including 14.5″ deep.

So why was Nectar rated higher than Casper?

Nectar gives users a full year to try out the mattress, plus a Forever Warranty, which definitely gives it a boost as compared to Casper! You can also check out our How We Rate page to learn more about how products are rated.

The delivery – do you place the mattress on the bed and remove the old or is that my problem?

This website is an informative comparison site that aims to offer its users find helpful information regarding the products and offers that will be suitable for their needs. We are able to maintain a free, high-quality service by receiving advertising fees from the brands and service providers we review on this website. These advertising fees, combined with our criteria and methodology, such as the conversion rates, our team of reviewer's finding and subjective experience and product popularity, impact the placement and position of the brands within the comparison table. In the event rating or scoring are assigned by us, they are based on the position in the comparison table, or according to other formula in the event specifically detailed by us. See our How we Rate page and Terms of Use for information. The reviews, rating and scoring are provided “as-is” without guaranties or warranties regarding the information contained in our website, which shall not be considered as endorsement. We make the best efforts to keep the information up-to-date, however, an offer’s terms might change at any time. We do not compare or include all service providers, brands and offers available in the market. 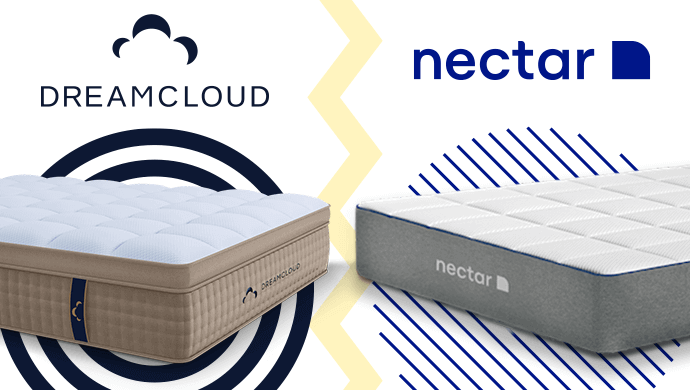 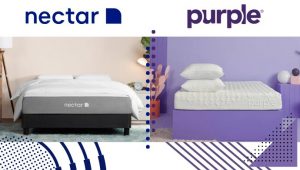 Nectar VS Purple: Which Mattress Should You Choose?
Latest Articles 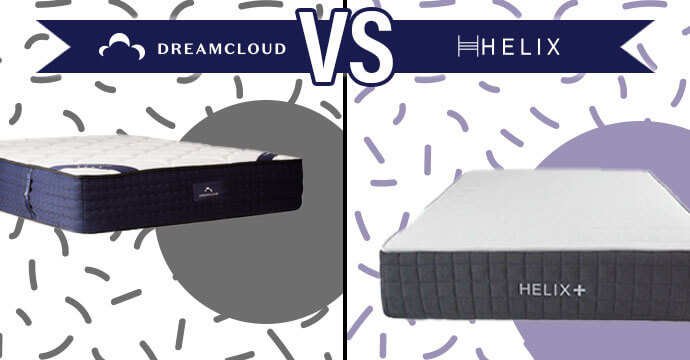 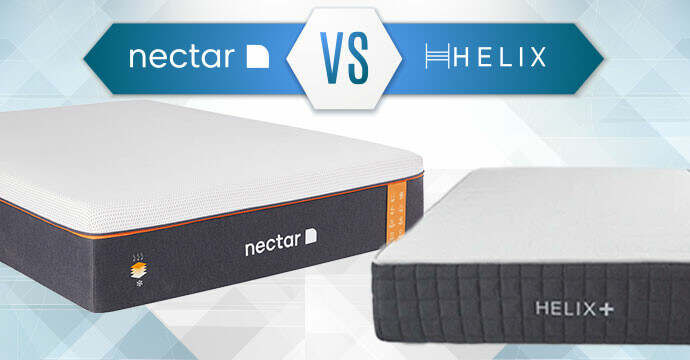 Should You Buy a Helix VS Nectar Mattress?
Quick Links
Contact Us

Our goal is to provide answers to all of your questions so you can make a confident purchasing decision. We welcome your feedback, so please email us at service@top5networks.com with suggestions and questions. We’d love to hear from you!